Climate zones in Europe and the Mediterranean

To fulfil our clients’ local demands, Barenbrug has been establishing research stations in different climatic zones in the last 50 years. Barenbrug now has a decentralised research operation in many different countries, guaranteeing better testing and selection, offering innovation and well-adapted cultivars and species in each climatic area.

That is why we roughly make a distinction between four different European climate zones, based on available geo-climatic data. Each zone is assigned a specific colour for easy identification. 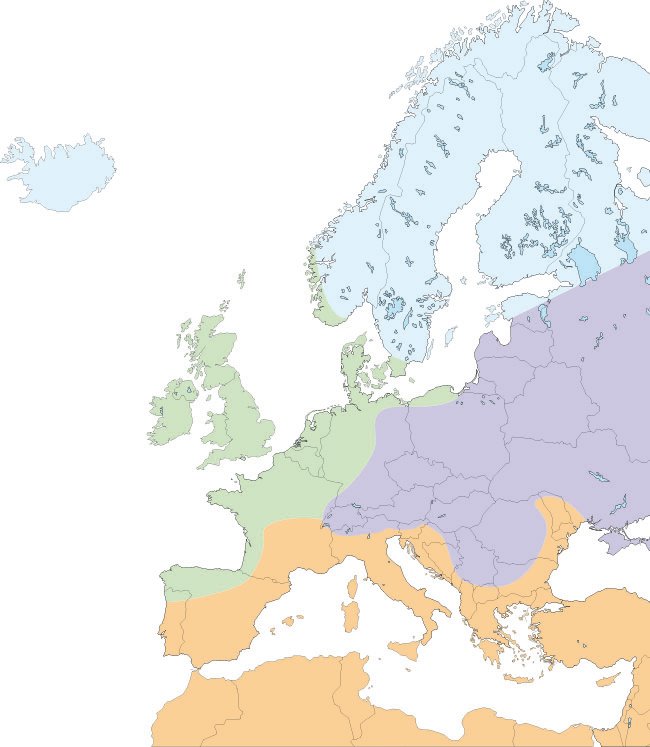 The Nordic climate extends over Scandinavia (including Iceland). It is characterized by humid, cold winters and mild, humid summers. During winter time there is usually snow, covering your turf. Within this climate you should consider the short growing season and the long dormancy in winter. In order to keep your grass green a good overseeding program is very essential.

Continental climate
The continental climate covers the central and eastern part of Europe. Main characteristics of the climate type are cold long lasting winters and predominantly hot summers. In order to maintain your turf under these harsh conditions, Barenbrug chose varieties that can survive both winter and summer extremes. Winter hardiness and cool temperature germination are key factors. However, when approaching the Mediterranean or Black Sea the climate becomes milder due to influences from the sea.

The Oceanic climate covers the countries and regions which are influenced by the Atlantic Ocean, North Sea and Baltic Sea. The climate usually has mild, wet winters and cool, humid summers. Long harsh frost periods are rare just like hot summers. Due to the longer growing period there are many possibilities and solutions to choose from. Barenbrug has a wide range of varieties that are suitable for your specific situation in the Atlantic climate.

The Mediterranean climate can be experiences around the Mediterranean sea. Countries like Spain, Portugal, Southern France, Italy, Greece and Turkey do all face hot dry summers and mild winters with hardly any frost. Drought and a lack of quality irrigation water are the biggest problems turf managers to deal with. Therefore Barenbrug included drought tolerant species and varieties in their mixtures for the southern areas.